Stabling of horses in training 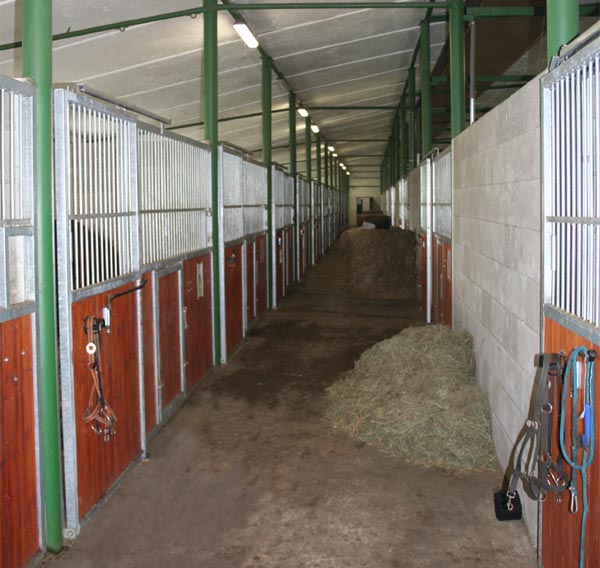 The training center has a capacity of 48 large (about 20m2) horse box stalls in two identical stables consisting of 24 boxes.

If you are surprised by these large horse box stalls, believe that large horse box stalls are normally used in the best barns in such countries as England and the USA, it is a matter of course. In the Czech Republic the pervasive influence of effort to capitalize on everything and everybody leads to the fact that the horse box stalls of a size of 8-12 m2 are considered to be satisfactory. In the spirit of this established practice, our stables could have the double capacity, which would lead to the increased efficiency and significantly lower costs of one horse, but this would be at the expense of those that should be at the forefront of interests, i.e. horses . The large boxes allow horses to stretch and partially step out, which has a very positive impact on their health and mental state. Either stable consists of the preparation room, feed store, saddle room and one inner box for washing with hot water. Both stable are insulated and 7 m high. They are equipped with the ceiling central air conditioning system. The partitions are 230 cm made of the high reinforced concrete with the waterproof finish. The front wall of the boxes are of the wooden walls at the bottom and of the bars at the top. The walls are equipped with the silent sliding doors, feeding window and tipping window on the hay. In each box there are the automatic feeding, draining horse troughs, holder for salt lick and separate lamp. The floor is made of concrete with the waterproof finish or according to individual needs covered with the thick-walled rubber mats. Either stable has 15 large windows providing sufficient light inside the stable.